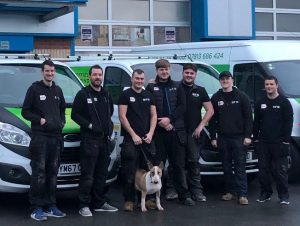 First, a history lesson: Weights and Measures go back a long way.  Mark Atherton, senior trading standards officer with Derbyshire County Council, referenced Magna Carta (1215) and Saxon King Edgar the Peaceful (960AD) who standardised measure throughout the realm. Fair measure has been the backbone of a successful market economy since the Bible: Deuteronomy 25:13-16, otherwise you’re an abomination unto the Lord.

A jolly figure with some hair-raising stories (rats in food, anyone?) who describes himself as “the man who goes round supermarkets pulling out the eyes of toys,” Mark was keen to explain the background to our current Trusted Traders scheme, which in Derbyshire now lists some 1,200 business and receives upwards of 200 customer comments a week.

It began as a welfare exercise for elderly residents some 10 years ago, as a way to beat the Nottingham Knockers. They’re the chaps who come selling stuff at your doorsteps, often telling you that they’re on day release from prison or trying to make a living after leaving custody, which may be the only true thing they say. “Nottingham” as they may well have had their collar felt in Nottingham nick; and they knock on doors, cold-calling. What they may be doing is checking on vulnerable occupants, those who are willing to part with money easily.

The addresses are sold on to worse villains who will arrive offering to fix the roof or drive. Hundreds of pounds later, the job is not done, or badly done. And the next visit may be from a burglar.

What if the elderly resident then thinks, “But my roof does need fixing – where can I find someone I can trust?” Hence the Trusted Traders scheme, though these days it’s accessed by customers of every age and background. Similar schemes run by other local authorities, but beware some of the commercial schemes which may promise more than they can deliver.

For Mark and his team are officers of the court with the same powers as constables. They can demand papers and enter premises at any reasonable time – that means, early morning for a baker’s, late at night in a pub serving short measure. “Unsocial hours,” Mark grinned, but he seems to thrive on them. We learned something in each sentence: for example, glasses selling by volume have a marked level, crown and a number on them. That’s the unique number of the Inspector who’s approved this glass for use. Mark’s is no 414 – now you know.

What’s in it for the trader? For most the listing costs only £75 a year, which gives the trader unlimited access to Inspectors, a regular newsletter warning against scams and alerting them to the latest legislation, and a guarantee for the public that the business is what it claims to be: many descriptions, such as “architect” are protected. If he’s a plasterer who claims he did specialist work at Chatsworth, Mark has checked there, and it’s true. The team can also offer “Assured Advice” which has to be paid for, but which can be used in defence in court – the trader has sought professional help, and has acted on it, and can prove it. One example was the chap who was reselling bleach and asked for guidance to be certain he wasn’t underfilling his bottles. In fact, he was overfilling them and was giving away £90,000 a year.

The customer is not always right, it appears. One recent case had a householder demanding rectification or his money back after an unsatisfactory kitchen job. But after checking, Mark pointed out that the customer did get what he’d ordered at a modest price. If something far more elaborate was in his mind, he should have asked for it and expected to pay far more. The trader remained on the listing.

Asked if they really check out all the businesses listed, the answer was a firm “Yes.”  Asked about e-commerce, however, the answer is that it depends where the business is domiciled; not all local authorities have schemes like this, though all have a trading standards team. If you’re buying online or from abroad, the advice is to use a credit card:  under Section 75 of the Consumer Credit Act 1974, you’re covered if something goes wrong with new or second-hand goods purchased on your credit card in the UK or abroad. You’ll likely get your money back.

And what happens if the trader is a bit of a rogue, and starts sending out offensive emails against the customer? One member has had that unpleasant experience. The trader had been found to be in the wrong and turfed off the listing. But Mark’s team only deal with criminal offences, not with civic cases. I’d say, beware of running up legal bills: libel is expensive. If on the other hand you’re being stalked or harassed, that’s something to be discussed with the police.

A fascinating glimpse into an ancient and modern public service, one which we can be proud of.

Some of you will remember Jon Culverhouse, CEO of Fantastic Fireworks, who spoke to us last March. We’ve had a lovely invitation from him:

“We are staging a demonstration display near you next month and I’d like to invite you and John to come along. It’s at a place called Shrigley Hall near Macclesfield and it’s taking place on Friday 29th March, 7pm – 9pm. There will be some bubbly and canapés beforehand with the fireworks going up about 8pm. The event is a bit of a showcase for us to attract the attention of wedding and event organisers. If there are any movers and shakers you’d like to bring along do let me know.”

If you would like to go yourselves – please contact Jon direct  JonC@fantasticfireworks.co.uk  You will have a great evening – enjoy!